My father had an interesting career as a leadman for motion pictures. In this capacity, he was responsible for the set dressing on movie sets and was able to put his boundless creativity and ingenuity to good use. His role allowed him to meet and work alongside many interesting people including actors, actresses, directors, and producers. His credits include films such as Analyze This, A Beautiful Mind, and The Devil Wears Prada.

I had to privilege to work with my father and his crew on a number of different movies and TV shows and was always very impressed by what they did. However, the job carried with it long hours, complicated logistics, and an often frantic pace.

Each day, my father would wake up before the sun rose, travel into New York, bounce around to different film locations, and then fight the brutal traffic back across the river to New Jersey. This was his routine from Monday to Friday, but when the weekend rolled around he was ready for some peace and relaxation in nature.

I have fond childhood memories of being awoken very early in the morning for fishing trips with my father, and usually, my brother Walter. I can remember wiping sleep from my eyes as my father urged me to get dressed. I remember going to the old shed in our yard to grab our fishing poles and tackle boxes. I remember stopping at the nearby Quik Chek for buttered rolls and bottles of water (for some reason, I can vividly recall standing in front of the vibrant Snapple refrigerator, being chilled by the wall of drinks and in awe of the endless flavors - the emerald mint bottle was especially memorable). I can also recall, unpleasantly, over a dozen occasions where my father pulled off the road as I succumbed to car sickness. This always seemed to occur in the same location, as we made the right turn onto Clinton Road off of Rt. 23, and I vomited on the same poor rock each time. Better memories were to be made once we got to our destination.

Sometimes we went to Echo Lake in Newfoundland, NJ. Other times we would hop around the reservoirs that make up the Pequannock Watershed. We rarely fished in the same body of water the entire day. Even when saltwater fishing, my father would spend a few hours at one inlet, move to another at lunchtime, and end the day by casting his line straight into the waves from the beach as the sun set. However, there was one particular lake that my father seemed to prefer more than any other, Wawayanda Lake in Wawayanda State Park. 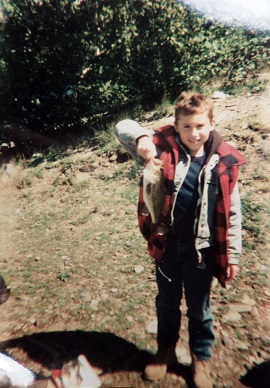 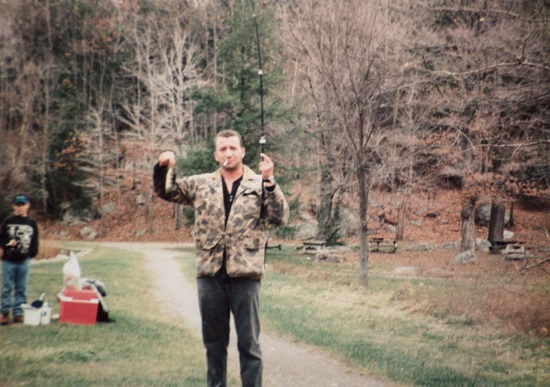 Any strain that my father's hectic work week caused him would start to thaw as we got further and further away from the city. By the time we were gliding along Clinton Road, with nothing but trees whizzing by on either side, the stress had completely melted away. I would stare out the backseat window at the forest, pondering the myriad of supernatural occurrences documented in Weird NJ magazine. Then, as we parked the car and stepped out into the brisk, musky breeze, there was serenity.

This week, I woke up at the break of dawn, stopped for breakfast and a coffee, glided along Clinton Road, and pulled my car into a spot in the very same parking lot. Despite all of the trips I had made here over the years, I had never seen the grounds covered in snow. Yet, this was the first day of spring and another nor'easter was heading into the area to drop nearly another foot of precipitation. The sun tried its best to peek through the overcast sky to no avail, far from what one might imagine for the equinox.

This trip was going to be different than those in the past for more reasons than just the weather. I was not at Wawayanda to do any fishing; instead, my goal was to explore the forest that had surrounded us each time we pulled a bass out of the water.

First, I crunched through the snow, passing picnic tables and stationary grills, and started on a wide dirt path that followed the banks of the lake from a ridge for a short distance before arriving at a portion of the lake from where we used to cast our poles. This short hike to our spot had always seemed a lot longer when I was younger, struggling to haul the tackle box, and moving as fast as my prepubescent legs would allow.

I could not accurately say when I was last standing at the edge of the lake, but I took a few moments to watch clouds roll above the ice-spotted water. Even when we used to come to fish on the weekends, we rarely wound up sharing this particular spot with anybody else, but when we needed to spread out a bit, there was a flat stone that protruded into the water to the left.

To get to this rock, one would need to enter the woods and hug the edge of the water for a very short distance. I used to do this, never fully out of my father's site, and would feel undeservedly rugged and accomplished. I fished from this outcrop on many of our trips, sometimes just to feel a small rush of excitement from traversing 40 feet of thin woods. Back then, I never would have been able to envision myself hiking 7 miles into the wilderness through the snow.

I took some time to quietly reminisce at the edge of the lake and reviewed my map. I recalled a time when my father directed my brother and I to reel in and gather our things before leading us onto a wide path into the forest.

At the time, it seemed like we had walked for miles before a pond appeared through the trees. We bushwhacked down to the banks and fished from there. Now, my map was telling me that I was on the yellow-blazed Laurel Pond Trail; young me didn't even notice any of the blazes back then. In fact, young me was startled by a quiet jogger as we were returning on the trail and I legitimately screamed "bear!" as I threw my fishing pole and dove to the ground. Between my father and older brother, I was the butt of jokes for quite some time.

On this day, the trail gently ascended deeper into the forest and within a few minutes Laurel Pond appeared through the bare trees. Due to the white blanket under my feet, I was unable to actually make it down to the pond. However, I slid down as close as I could to snap some photos and try to visualize myself here as a boy. From my vantage point, aside from the snow, the area thankfully looked largely unchanged. It was here, over 20 years ago, that I pulled in an impressive brown trout after a long fight - it would be the only brown trout I have ever caught.

I trudged up the small hill, pulled myself back up to the trail through the branches of fallen trees, and carried on. I followed the Laurel Pond Trail to the black & white-blazed Cherry Hill Ridge Trail. The trail continued to ascend, but the map didn't indicate any impressive views. I had hoped that perhaps I would find one up on this ridge. Unfortunately, no view materialized on this woods road, but the white forest was impressive and enjoyable simply due to its vastness and tranquility.

Eventually, to my right, I spotted the orange-blazed Pumphouse Trail which would take me back to where I had parked my car. I followed deer tracks into the snow onto the trail and could immediately surmise that this path had been less frequented than the others. The ground was relatively undisturbed, I was following just one other set of human prints alongside those of the deer.

Clearly, trail maintenance had not been completed since the last storm as many fallen trees and large irregular branches blocked the path which required a lot of ducking

and bending to overcome as I descended deeper into the woods. I came across a few streams and hopped from mossy rock to mossy rock to get to the other side. Elaborate ice crystals decorated the edges of the water.

A while later, I arrived at the blue-blazed Boulder Garden Trail which was a quasi-shortcut to another point on the Pumphouse Trail. The Boulder Garden Trail was aptly named as large glacial erratics of different shapes and sizes peppered the landscape. I imagine this trail would be even more attractive in the summer months, when the boulders would be accentuated by the lush forest and radiant sunlight.

The blue blazes came to an end at a marshy area, starkly devoid of snow. The contrast between the bright white snow and humid earthy marsh was remarkable. The trail ascended again back to the Pumphouse Trail and I followed the orange blazes for a short distance before emerging back on the opposite side of the parking lot. To return to my vehicle, I had to walk along the edge of the lake. I did so slowly, savoring the quiet in the air and the stillness of the water. Suddenly, I recalled the last time I had been here.

It was in the spring of 2012. At the time, my father was in the final months of his life as he battled colon and stomach cancer. Despite the immense pain and exhaustion he was likely facing, he had demanded that I bring him fishing. We spent the entire morning visiting two reservoirs before ending up at Wawayanda Lake. My father, who had fought valiantly throughout his years-long ordeal, had recently started to feel weak and was noticeably less active than he had generally been. Even driving was becoming an issue due to increasing discomfort.

However, for the seven hours we spent fishing together, my father seemed closest to his old self as he had in a long time. He was sending out long casts, wheeling in large mouth bass with ease, and was happily bouncing to and from the tackle box. Nature was once again his serenity: calming him, soothing him, and giving him some long-desired peace. My father passed away in August 2012 and I am grateful that we made it to Wawayanda Lake one last time.

Although I have traded fishing for hiking in recent years, the common thread of love for nature was one of the things that I certainly inherited. The few jaunts into the forest that I enjoyed as a child definitely fed into what I am currently doing and if it wasn't for my father sharing his passion for the outdoors with me, I may very well not have the confidence, desire, or ability to hike to the amazing places I have visited. Unfortunately, I did not inherit my father's exceptional cooking skills.

I have only scratched the surface here at Wawayanda State Park and will surely return to explore again in the spring and summer. Sure, I did not get any special photos of any sweeping views or high peaks, but this hike was important due to my history with the park. After the hike, I went online and ordered a fold-up fishing pole that I should be able to fit in my bag. The next time I find myself passing Laurel Pond, I will be bushwhacking down, casting out, and trying to catch another brown trout. 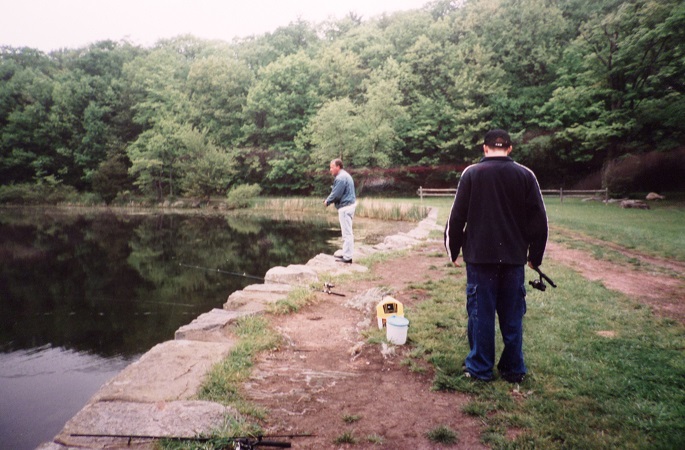 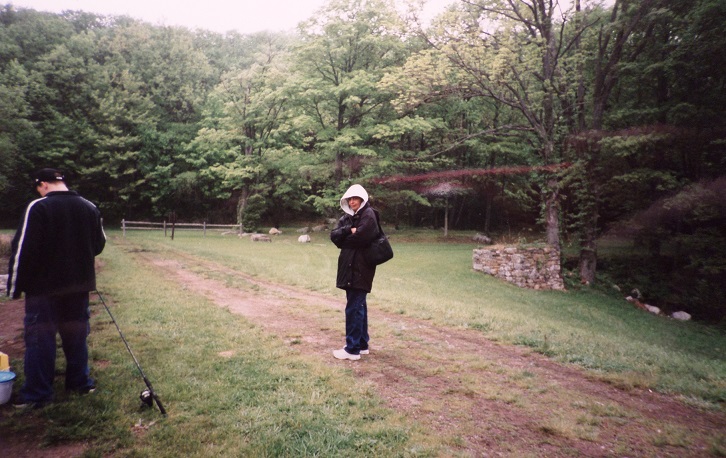 A Perfect Day for a Double Take...

D-Day at the Tors

The Catskills for the Weekend